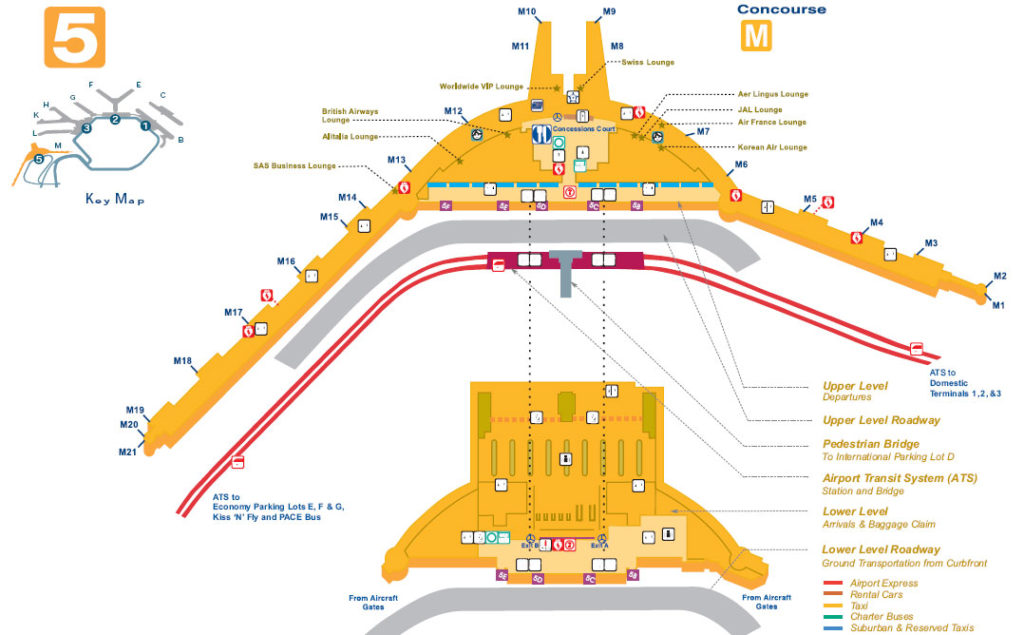 Chicago O’Hare airport is not the luxury, it is the necessity. Capricious public demands lots of venues, where it’s possible to entertain – bars, restaurants, boutiques and movie theaters. But airport O’Hare is not the passing fashion. Many people worldwide can’t imagine their life without coming here. Lots of trips start and end at ORD airport. Lots of airlines choose O’Hare as the hub. Lots of people work here and improve it every day.

There are 5 terminals at this airport. But Chicago O’Hare airport terminal 5 is special. It operates international flights. So, what’s necessary to know about terminal 5 in O’Hare?

Terminal 5 at Chicago airport is big enough and has a shape of the plane. It consists of 2 levels – Upper and Lower, and has just one concourse – M. For now the terminal 5 has just 21 gates, but 9 extra gates are planned to be added soon.

Terminal 5 building stays aside of three other terminals (T3 is the closest to it) of the airport, which serve domestic flights. Terminal 5 is connected with others through ATS (Air Transport System).

At the upper level of T5 there are the gates, which are placed through the construction. At the lower level there are ground transportation and baggage claim offices.

In 2012 terminal 5 was closed for renovation. Two years later the rebuilding of the terminal came to an end. To remodel it cost a pretty penny – $26 million.

The airport administration, as well as Chicago citizens, was proud of renovated terminal, when it had finally been opened. No wonder, because the airport serves international flights. At terminal 5 in O’Hare tourists make their first impression on Chicago. The well-equipped terminal absolutely blows their minds.

If earlier terminal 5 in O’Hare looked a little pale in comparison with terminals 1, 2 and 3, now it looks even brighter.

Twenty-four more shops and cafes were opened at terminal 5, usually abbreviated as T5. Although the renovation was quite expensive, the airport administration hopes to get money back soon – the renewed terminal is supposed to attract tourists, who will leave their money here!

Numerous eating venues were opened at T5 in O’Hare. But we’ll speak about O’Hare airport terminal 5 food a little later.

Now we want to tell you about T5 great lounges and XpresSpa – the special places, where the travelers can relax and freshen up before the flight.

In fact, XpresSpa is opened not just in O’Hare, it is the largest net work of spa venues, which operates in the airports. According to XpresSpa representatives’ words, they have taken the conception of the first-rate spa at the 5th avenue and adopted it for the airports.

Thus, any traveler at T5 in O’Hare can visit the spa and relax there, get rid of stress make a facial mask or manicure. For frequent travelers the annual membership is possible.

2) Lounges at terminal 5 in O’Hare

There’s a number of lounges at T5 in Chicago O’Hare, where the visitors can have some rest.

Korean Air Lounge, Swiss Lounge, Flagship Lounge and some others are located there. One of the most popular and high-rated lounges at O’Hare is Delta Sky Club lounge. The lounge is a bit overcrowded; nevertheless visitors mention its great service and wide selection of food and beverages.

At terminal 5 in O’Hare the process of waiting for the flight turns into an enjoyable event. And it is continued with a great flight experience, if you choose the carrier correctly.

As at T5 international flights take place, the airlines are famous and reputable here and had headquarters in different cities and countries all over the globe.

In general 50 airlines serve flights at O’Hare and 30 of them work at terminal 5.

The most remarkable airlines, which operate the international flights, are AeroMexico, Air France, British Airways, China Eastern, KLM, Turkish Airlines, United Airlines and many others. We’ll tell you in detail about the most popular terminal 5 airlines.

Lufthansa serves only arrivals at terminal 5 in O’Hare. It is one of the most reputable airlines in the world with the headquarter in Cologne, Germany. Lufthansa owns 272 planes and serves flights to 220 different destinations all over the world.

Clients like to choose Lufthansa at the carrier as the seats are roomy and comfortable here (even economy class). Meals are tasty and nourishing. They offer chicken and pasta for dinner and other dishes of that kind. To entertain during the flight there’s a private screen, built in the back of each armchair.

If you are a frequent traveler, no doubt, you have already flown with Turkish Airlines. Being one of the largest companies in the world, it owns 328 planes and serves the flights to 302 places all over the globe. The headquarter of the company is in Istanbul. The clients of the airline mostly rate it high – for tasty food, great service and comfortable seats.

One of the best French aircraft companies, Air France is the flag carrier in their home country (it means, that they serve government flights.

Air France has 223 planes, which it sends to 201 venues all over the world. The clients like to fly with Air France. They mention, that staff is helpful and friendly here, that food is great, but complain about the lack of entertainments during the flight, like free Wi Fi or TV.

Surely, there’s a great selection of airlines in terminal 5 in O’Hare and each tourist can find that one, which suits his taste and budget. As for food venues, the choice is even wider in this area!

Here are the most popular and remarkable venues to have a snack at T5 in Chicago airport.

This brand is located in different terminals at O’Hare and after the renovation this food option has become affordable for travelers in terminal 5.

The place is operated by a famous chef Rick Bayless, which serves various kinds of delicious tortas. It is located at gate M12 in terminal 5.

O’Hare airport terminal 5 food is versatile, and various kinds of cuisine are served at the airport to make tourists of all nations feel comfortable there. The lovers of Italian cuisine are welcomed to gate M7 in T5 to eat the tastiest pizza, fresh salads and hot pasta.

The bistro, where the Mediterranean cuisine is served, is the best choice for those, who want to have delicious dinner for a reasonable price. Lentil soup, kebabs, salads and various beverages taste well and cost a nuisance. Service here is good enough. The bistro is located at gate M2.

Car parking is one of the most important and complicated questions for a traveler. The international parking in O’Hare is located near the building of terminal 5. O’Hare terminal 5 parking rates are quite high, that’s why it’s not recommended to leave the vehicle for a long time here. The car parking prices increase at nights. The price for the first hour at the parking is $2. Four hours of staying here cost $11 and for staying here from 9 to 24 hours the price is $74.

The map of renovated terminal 5, located in O’Hare International Airport, will help to find the necessary venue. The maps, affordable online, are presented in two different forms – interactive and printed. O’Hare map terminal 5 can be uploaded to the mobile phone too.

Even if you are an experienced traveler, it is recommended to have the map of terminal 2 on hand in any of its forms – printed on a shit of paper or on the screen of your smartphone. In this case you’ll find the necessary establishments – check-ins, cafes and restaurants, lounges etc – easily and quickly.

Keep in mind, that the best trip is always well planned. Take your time to plan your trip and enjoy your staying in terminal 5, O’Hare!