O’Hare Terminal 2: If Your Trip Starts There, You Are In Good Hands! 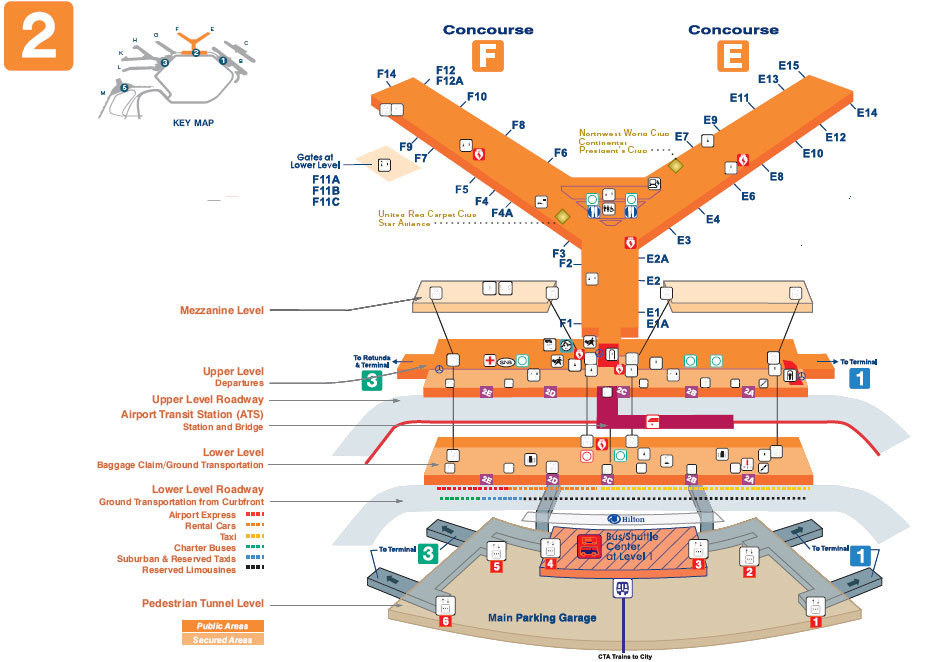 Aviation is one of the greatest things, created by human beings. It helps develop international cooperation. Trips by air have no boundaries – not only mental, but also geographical. Traveling by plane gives people of different nations an opportunity to know each other better.

Lots of airports all over the world serve flights, both internal and international. Chicago O’Hare airport is one of the largest in the world. It is divided into four terminals. We’ll speak about O’Hare terminal 2 today.

This terminal serves domestic flights. The building of T2 is large and spacious; it has the shape of letter V. It’s not easy to move around O’Hare terminal 2 because of its long lines to check-ins, which are hard to pass by as they are spread to the walkway.

Chicago O’Hare airport terminal 2 is divided into three levels. They are mezzanine level (an intermediate floor), upper level (where departures take place) and lower level (where baggage claim is located).

Terminal 2 at O’Hare has connections to terminals 1 and 3. It’s possible to get to the other terminal from here on foot or to use a shuttle bus, which is operated by Airport Transit System.

To get to the airport from the city and vice versa is possible through the ground transportation, affordable at Lower Level of terminal 2. The clients can choose from various transport means, starting from a rented car and a reserved taxi and ending with charter buses and trains.

Through Chicago O’Hare airport terminal 2 is possible to get to Hotel Hilton, which is adjoined to the lower level.

It is hard to recommend or not to recommend this terminal for you – actually, you have not so much choice. But most of the visitors value terminal 2 at O’Hare high – mostly because it is clean and has a great infrastructure.

The building of terminal 2 at O’Hare is divided into 2 concourses – E and F. Seventeen gates are located at concourse E and twenty-six gates are at concourse F.

Terminal 2 at ORD airport has lots of services and establishments, which are targeted to make passengers’ life better. The venues here are both traditional and non-traditional.

Among traditional services, affordable at T2 there are restrooms, wheelchair assistance office, pharmacy, ATM and some others. As for non-traditional establishments, there’s a chapel here. Very often people have to stay in the building of the airport for a long time. They get nervous, worry about their flight and need some peace for their soul. To lift up your spirit and clear your heart, go to the chapel, which is situated at mezzanine level in terminal 2, Chicago O’Hare. This place is the calm oasis, where people pray and perform various religious rites, such as liturgies.

Probably, chapel is a great venue to calm down before the flight and then – with an easy heart – to go to the gate, which is served by your airline. By the way, what terminal 2 airlines serve the airport?

Air Canada is headquartered at Montreal, Quebec, Canada. It is the largest aircraft company on the Canadian market. Currently Air Canada serves flights not only in USA, but also in more than 200 other destinations, situated at 6 different continents.

The other big carrier at terminal 2 is Delta Air Lines. Its headquarter is situated at Atlanta, Georgia, USA. One of the biggest aircraft companies in America, Delta operates more than 5, 000 flights on a daily basis. Its planes fly to 319 various destinations, based in 54 different countries.

Delta owns a lounge club at terminal 2 in O’Hare, named lounges Delta sky club. The club is the place, where a passenger can have some rest during the trip. The membership at the club costs from $495 to $745 per year. Those, who have purchased a membership, can enjoy staying in comfortable rooms between flights, have some food and beverages and even arrange a business meeting at a conference room. The club is situated in concourse E, gate 26.

There’s also another place to relax before flight – United Club. It is located at concourse 3 and offers spacious comfortable rooms, where the passenger can have a snack and a drink, waiting for the flight. Reviewers tell that service is first-grade here.

It’s possible to have a snack at one of the clubs, served by airlines. But at terminal 2 in O’Hare there are many other eating venues too.

O’Hare Airport Terminal 2 Food: Where To Get The Best Eating Experience?

There’s great news for food lovers – more than 10 cafes and restaurants are working on the territory of terminal 2. No need to say, that each person chooses the place to eat according to his needs and tastes. Thus, if you dream about hot tea or coffee with pastries, then pop into “Argo Tea” or “Starbucks Coffee”.

For passengers, who want to have a full meal, it’s better to choose McDonald’s, La Tapenade Mediterranean Café or Brioche Doree.

Most of the clients value high the food and service at Summer House Santa Monica. Here the clients enjoy simple dishes, cooked by chef, which resemble domestic “mommy” food. The menu in the restaurant is extensive: roasted chicken breasts, different salads, steaks, handmade cocktails and perfect desserts. To make the dinner even more relaxing, there’s a great selection of West Coast wines in the menu.

For passengers, who want to eat something from Asian cuisine, there’s Wicker Park Seafood and Sushi Bar, located in the main hall of terminal 2 in O’Hare, Chicago.

The most exotic among O’Hare Airport terminal 2 food choices, the bar can boast with the spacious room (104 seats are affordable here) and such unusual dishes in the menu as nigiri, maki, rolls etc.

In concourse E, near the gate 5 there’s a restaurant, which serves Italian cuisine – “Uno’s Pizza Express”. Not hard to guess, that various kinds of pizza are served there – deep prima pepperoni, thin super roni, various kinds of salads and appetizers.

Wide choice of cocktails and wines as well as kids’ menu will make the dinner really versatile and suitable to any member of your family.

As you see, it’s not a problem to dine at terminal 2. But what’s about parking?

O’Hare Terminal 2 Parking: How to Start the Trip Correctly

The right and carefree parking is the best start of the nicest trip. At Chicago O’Hare various parking services are affordable. The car owner can use hourly car rates, daily car rates as well as long-term economy parking rates. In addition, valet parking service is wide spread in O’Hara too.

Follow the signs in the area around the building of terminal 2 to find the necessary parking service you need.

The main car parking garage is connected with terminal 2 through a tunnel. There you can ask a valet to park the vehicle for you. Otherwise, you can place the car yourself and pay about $2 for the first hour (an hourly rate) or about $35 per day (daily rate).

If you are looking for money saving option, then use economy lots E and F. But you should know, that they stay away of the terminal 2 in O’Hare. To get to T2 from economy lots, the passengers use shuttle buses. They go every 4 minutes and will get the clients to the building very quickly.

It’s not hard to find a necessary service at O’Hare terminal 2 as there are lots of signs, which show the visitors the right way. In addition, the staff of the terminal 2 is always ready to help. But for travelers, who want to feel confident in the building of the airport, there’s a map.

Terminal maps are necessary for passengers to plan their itinerary in advance. The maps are affordable at the official site of Chicago O’Hare and many other internet resources. Look through O’Hare map terminal 2 online and find all the venues and services there. Then you can print the map or upload the appropriate mobile app to your phone. And feel confident at terminal too O’Hare, even if you have never been there before.

O’Hare terminal 2 accepts thousands of travelers every day. Your trip is in good hands!