O’Hare Terminal 1 in Detail: How Not To Get Lost in Its Concourses, Relax in a Bar and Get To the Gate in Time 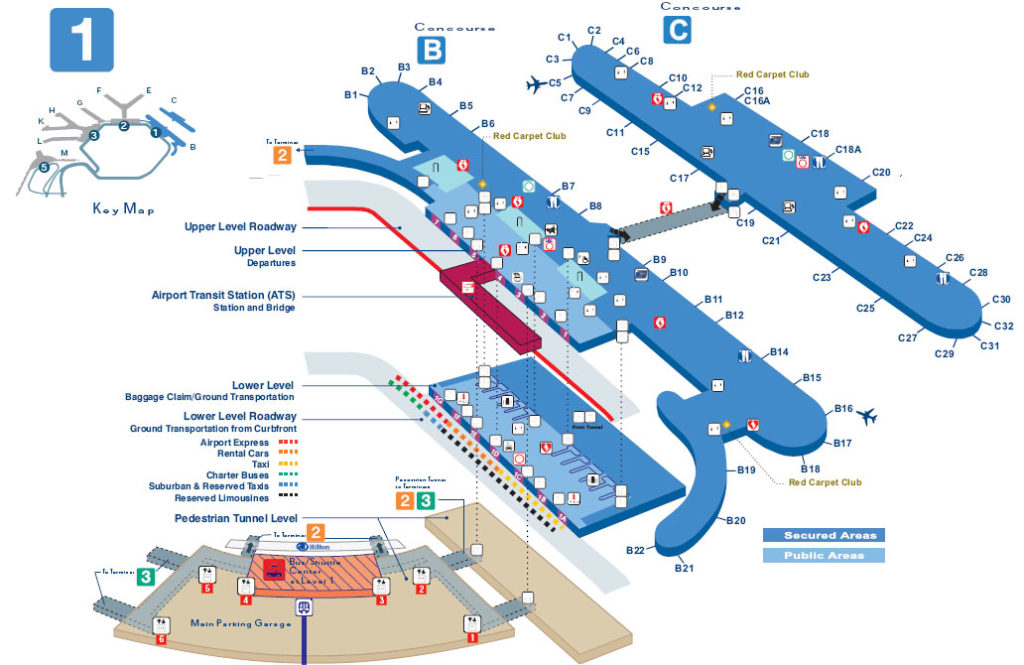 If travelers have money, the airports always offer a long list of services, which they can sell to them. At Chicago O’Hare International Airport the passengers enjoy a whole network of establishments, which were opened to satisfy needs of each client. O’Hare Terminal 1 serves internal flights from Chicago to various cities of America. Here you can get all kinds of eating experience, starting from the venues, where you can eat a couple of hot sausages and ending with luxurious restaurants, where delicious food is served on porcelain plates. You can have a cup of strong coffee at a café and drink a glass of perfect brandy in the bar.

In addition, it’s possible to do lots of things, without living a terminal – buy gifts and basic necessities, rent a hotel room and a car, take a Turkish bath, order Thai massage, iron your clothes and … even die and to be buried as a number of funeral services rent offices not far from O’Hare too.

The great variety of opportunities very often makes the clients confused. They feel lost in a huge sea of comfort and care. Here’s a guide for you, which can help navigate at Terminal 1 in O’Hare airport, if your way passes through this point on the map.

Concourses B and C at Terminal 1 in O’Hare 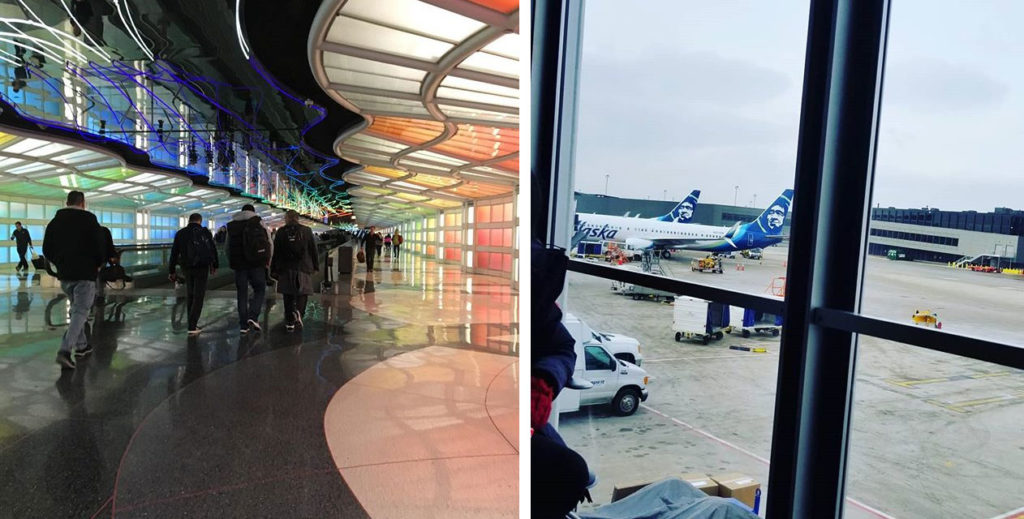 Chicago O’Hare airport has four terminals. Three of them serve domestic flights and the fifth one serves international roots.

Terminal 1 is very large, that’s why it is recommended to wear comfortable shoes to walk for quite long distances. Chicago O’Hare airport terminal 1 is divided into 2 concourses – concourse B and concourse C. Both B and C have 55 gates. The concourses are situated parallel to each other. Concourse B is joined to the airport road. It contains all the necessary services, such as check-ins, luggage claims etc. This concourse has gates just at the side, where the aircrafts can be seen.

Concourse C is the satellite terminal. It means that it is separated from the other buildings of O’Hare. This concourse can accept planes around its entire circle. Concourse C is adjacent to concourse B with a long tunnel, which you can easily overcome on foot. In addition, it’s easy to get from Terminal 1 to Terminal 2 and 3 through similar pedestrian tunnels.

If you need to wait for a flight at T1 for a certain period, don’t be afraid of it. There’s a number of restrooms here, where you can refresh. By the way, in restrooms there’s a sign, which warns the passengers about human tracking.

There’s a number of armchairs for passengers, who are waiting in their gates. Most of Chicago Airport visitors complain that the number of seats is too small for such a large airport, and lots of people have to wait, staying on foot.

It’s possible to recharge a cell phone at any of gates, but the number of plugs is limited too.

Terminal 1 in Chicago O’Hare is served by numerous airlines.

Terminal 1 Airlines: Looking for the Best

The choice of an airline is one of the most important questions, which arises in front of the traveler. People are looking for a great combination of both, comfort and reasonable price, that’s why they are selecting the airline to serve their flight really carefully.

List of airlines at Terminal 1 is not extensive, nevertheless a number of great companies arrange flights here. Most part of aircrafts at T1 in O’Hare belongs to United Airlines. This company is one of the most reputable among other terminal 1 airlines. It serves lots of domestic and even some international flights.

United Airlines is one of the oldest and most famous companies in USA. It started working in spring 1926, when operated the first flight – it was a plane with mail on its board.

Today United Airlines is the third largest aircraft carrier in the world. It operates flights in the largest airports of USA – in Chicago O’Hare, Denver Airport, San Francisco Airport and many others. It serves international flights as well, and uses Tokyo Narita and Guam airports as its hubs too.

The company owns a number of modern comfortable planes, including but not limited to Boeings and Airbuses. The general number of its planes is 1, 200. United Airlines has a headquarter in Chicago, IL.

The other airlines, which serve flights at Terminal 1 in ORD airport are All Nippon (Japan), Lufthansa (German) and Ted (USA).

Hopefully, you’ll choose the necessary airline company and get the tickets to a certain flight. But what, if you want to eat, waiting for your plane in Terminal 1, O’Hare?

Although O’Hare Airport is not the place, where people come with the aim to eat, but there are plenty of venues here, where passengers can have a snack or even get a combo dinner. There are lot of food kiosks, bars, cafes and restaurants at Chicago O’Hare airport terminal 1.

We must warn you, that eating at O’Hare will cost you a top dollar, so if you plan a budget variant of travelling, eat before getting to T1. But for those, who have some extra cash to spend, there are some venues to refresh with a cold cocktail or get warmer with a glass of wine.

This café is situated in concourse B at T1 near the gate 18. It looks nice both, inside and outside. Italian dishes are served there. The lovers of red noble wine and hot pizza with lots of cheese on it, can go to Stefani’s Tuscany Café to make the waiting process more comfortable.

According to client’s reviews, service here is fast and not intrusive and prices are reasonable – in comparison with other restaurants and bars at Terminal 1. So, pop in to relax before the long flight.

Even if you travel on business, to have a glass of beer is always a good idea. The bar, located at Terminal 1 in O’Hare (in the middle part of concourse B), belongs to a famous Chicago brewery Concessionaire HMSHost. If you pop in, you’ll get a chance to enjoy a vast choice of beer (there are eight beer taps in the bar), comfortable seats and a large selection of food (such as pizza, panini, various kinds of salads etc).

The café can be found in concourse B after security desk (terminal 1). Tortas Frontera, operated by Chef Rick Bayless, is very neat and comfortable. Clients complain about long queues in the venue and about long waiting period for an order as a result.

But tortas, which are served here, are worth each penny and each minute of waiting. Tortas, just made by loving and skilful hands by the chef, taste like food of gods. Poured with fresh guacamole or green sauce and combined with and just-shaken margaritas, tortas here will make your day! By the way, now they have an extra option – tortas can be ordered in advance on phone.

These three cafes are not the only ones in the long list of eating venues at terminal 1 (O’Hare). Such places as Berghoff Café with its perfect sandwiches, La Tapenade with Mediterranean salads, “Beaudevin” with great selection of wines and many other cafes and restaurants are worth your attention, if you are in an eating mood.

Of course, O’Hare airport terminal 1 food is an important question to be discussed to make the traveling experience pleasant. But transportation to the building of the airport and getting out of there is another question, which needs the answer.

The car parking at terminal 1 in O’Hare is located not far from concourse B. You can get to the nearest car park through a pedestrian tunnel. Through the tunnel you’ll get to the shuttle centre (where it is possible to take a shuttle to some hotels near Chicago O’Hare). Behind the shuttle centre car park area – Lot A – is affordable.

O’Hare terminal 1 parking prices are various. The hourly parking here costs about $2 per hour (first hour). The daily parking will cost you about $35 per day. If you need to book a place at a car park in advance – you can do it online.

O’Hare Map Terminal 1 – Not To Get Lost

We have told you in detail about the infrastructure of O’Hare Terminal 1. But it’s better to see once than to hear twice, that’s why you should have O’Hare terminal 1 map in front of your eyes in order not to get lost. The map is affordable online and through Chicago O’Hare mobile app. You can print it and take with you on your way to terminal 1 in O’Hare.

Hopefully, you’ll have a nice trip!