Get Around O’Hare Terminal 3 with Us: Tips for Travelers 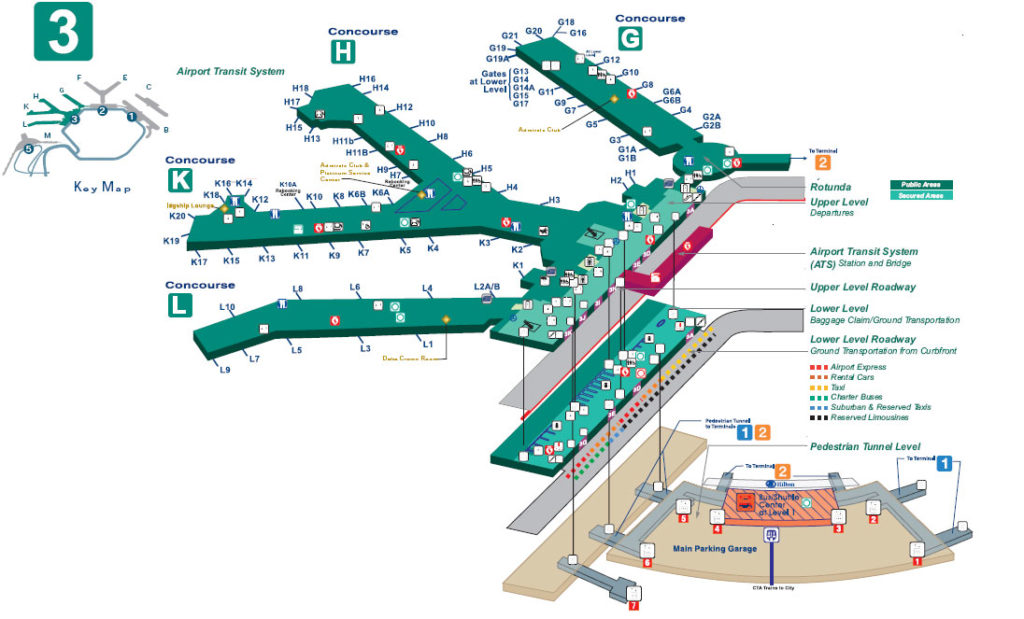 Planes are relatively new means of transportation, that’s why most of people feel confused, when they appear in the airport. Especially, if the airport is as big as O’Hare. So, if your flight takes place at Chicago O’Hare airport terminal 3, then this article will be helpful for you!

Infrastructure of Terminal 3 at O’Hare

This terminal is one of the largest in Chicago O’Hare airport. The concourses G, H, K and L are located at terminal 3. The airport can boast with 75 gates, which are divided between four concourses. By the way, five more gates will be added to terminal 3 in O’Hare soon.

The building of the gates is sponsored by American Airlines. No need to say, that constructing of new gates is incredibly expensive, but one of the most powerful aircraft companies in USA – American airlines – decided to spend some cash for it. That act seems even more generous, if to take into consideration the fact that no new gates had been built in O’Hare within the last 20 years.

American Airlines had to make such a costly decision as for new gate constructing, because the company plans to expand. The competition for free gates is quite tough at O’Hare – one of the busiest airports in the world. That’s why American Airlines did a power move and started to build the gates for themselves. The building is planned to be finished till the end of 2018. Thus, American Airlines will have got to the end of the year 71 gates in general at Chicago O’Hare.

New gates, which, probably, will be named “L Stinger”, is not the only one place to see at Chicago O’Hare airport terminal 3. There are also several stunning places to have a rest at – Admirals Club and Flagship Lounge.

Admirals Club is one more facility, operated by American Airlines. The company renovated former Delta SkyClub, situated in concourse L, and presented the new place for rest in late 2016.

In addition, the airline, that has an intention to become the most influential in USA, opened a Flagship Lounge between concourses H and K in ORD airport.

The lounge is entered through a special digital card, which can be ordered in advance. It has 17,000 sq. ft., which is more than other lounges at terminal 3, even those which have VIP status.

The lounge is furnished with deep comfortable armchairs, dinner tables and food area, where the guests can make tea or coffee.

Among other sites, which are located at terminal 3 in O’Hare airport there’s a yoga room and aeroponic garden.

As you see, terminal 3 is worth visiting. But what airlines are working there?

Terminal 3 at O’Hare is served by the following airlines – American Airlines (we have already told you about them), Alaska Airlines, LATAM Airline, Japan Airlines, Iberia Airlines and some others. We’ll give you the basic facts on them.

The aircraft company serves numerous flights at Chicago O’Hare, so it deserves our attention. The airline was founded in early 30s and then it was named “McGee Airways”. Now Alaska Airlines is the fifth largest company in USA. It serves flights to more than 100 places of destination in USA. It operates international flights too – to Mexico, Cuba, Costa Rica etc. The headquarter of the carrier is situated in SeaTac, Washington.

This airline is located in South Africa and has headquarters in Chile and Brazil.

In summer, 2010 the airlines LAN and TAM announced their consolidation. They were united into a brand, named LATAM. The process of rebranding was quite long and was finished to the end of spring in 2016.

Now the airline serves more than 100 destinations in 23 countries all over the world. One of airports, which LATAM Airline uses as a hub, is Chicago O’Hare.

Most clients of the airline value high its service. Nevertheless, they recommend downloading LATAM app in advance to entertain during the flight.

The procedure of boarding is a little different from that one at terminal 3 airlines. The process of sticking labels to the luggage is done automatically, that’s why some travelers (who are lack of experience) feel lost. So, the queues may be really long there. The good news is that the workers are always ready to help.

This airline is the second best aircraft company in Japan. The government of this country uses this airline for international flights. The headquarter of the airline is in Tokyo, Japan.

Japan Airlines owns 279 planes. It takes both, passengers and cargo to 35 different countries all over the globe.

Most clients rate Japan Airlines, which is commonly abbreviated to JAL, really high! Even the economy seats here are spacious, there are different options in the menu – to satisfy any needs of the eater, and there are plugs to recharge the phone during the flight.

Iberia is the Spanish airline with a headquarter at Madrid. It owns 79 flights, which take people to 109 destinations, located in 39 various countries.

The airline got modest reviews from clients, which proofs that the company is good enough to serve the flight, but not the best one among the others with the same level of prices.

The right choice of the airline is 50% of future success of the journey. But right meal plan is not less substantial!

Many people plan their trip in such a way they shouldn’t eat in the airport. That idea is reasonable, especially of those travelers, whose budget is limited. Very often food in the airport is not so versatile and plus it’s overpriced.

But for those, who must stay in the airport for long, or have enough money not to count them at all, here are the places, which serve the best O’Hare airport terminal 3 food.

More than thirty eating venues are opened at terminal 3 in O’Hare. Among them there are cafes, restaurants, bars and fast food establishments.

Most part of places, which serve O’Hare airport terminal 3 food are the same as in terminal 1 and 2. Here travelers enjoy hot coffee in “Starbucks”, hot tea in “Argo Tea”, burgers at “McDonalds”, pizza in “Uno’s Pizza Express” etc.

Among the greatest places to eat and to relax at terminal 3 in ORD airport there are Bubbles Wine Bar and Publican Tavern.

Although traveling by air is considered as one of the safest ways to travel in the world, still many people are afraid of flights. That’s why visiting a cozy bar and having a glass of wine, champagne or beer to relax is really a good idea. Although not much food options are affordable here, still a number of incredibly tasty salads will help at least to save the worm. The bar is located in concourse H.

People come here to enjoy tasty crispy sandwiches and a glass of cold beer. The variety of fresh salads, among which the clients particularly emphasize Turkish salad, can make your mouth fill with water.

The friendly staff and cozy ambience serve as the special bonus here.

So, eating venues at terminal 3 suit any taste. Parking options are versatile here too!

Parking at terminal 3 offers various options in order to satisfy the needs of each client. The hourly rate is quite high here – $2 per the first hour and then the price increases. The day at hourly parking will cost you about $60, so if you plan to leave the vehicle for long, it’s better to use daily parking – it costs about $35-40 per day.

For visitors, who want to save some extra dollars, economy parking is available. It is located in Lots E and F. The lots are situated at a reasonable distance from terminal 3, but they cost much less. The rate at economy parking is $10 per day.

It’s not hard to find O’Hare map terminal 3 online – at the site of the airport, for example. The mobile version of the map is also affordable. Terminal 3 at O’Hare is really large. Of course, the staff here is attentive, and the workers are always ready to help. Nevertheless, to feel more confident, it’s recommended to get O’Hare terminal 3 map with you. It’s possible to print it in advance.

Do you like trips? In fact, most people like traveling – and it’s not important, what transport means to choose for it. Whether you go on journey by train, by bus, by an ocean liner or simply take from the garage your own car, you open the new page in your life book. If one of your trip destinations is terminal 3 in O’Hare, hopefully, we helped you to get ready for it!