Roomy, Glamorous and Mysterious Terminals in O’Hara: Facts on Each OF Them As Well As Connecting Terminals Info 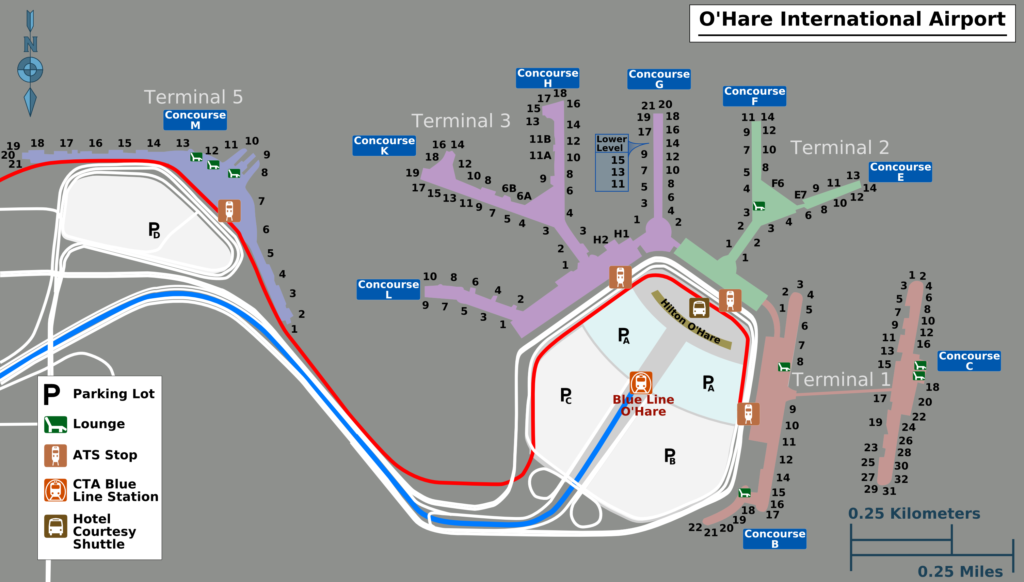 Have you ever noticed how talented Steven Spielberg is? Each person on the planet has at least one Spielberg film among his favorites.

In 2004, Steven presented one more masterpiece – the melodrama “Terminal” with beautiful Catherine Zeta-Jones and sincere Tom Hanks as the lead actors.

Oh no, Spielberg’s movie was not filmed in one of O’Hare terminals. In fact, the actors portrayed their memorable heroes within the masterfully constructed scenery.

To make his movie, the film director Steven Spielberg had to build an exact copy of the modern airport terminal.

But it is interesting to know that Tom Hanks hero, Viktor Navorski, managed to live at the airport for a rather long period without leaving it, and at the same time he had everything necessary on hand.

He found not only food and water, but also job, as well as real friends.

But Navorski could be even luckier, if he had got stuck in one of Chicago airport terminals. And by the way, how many of them are in the airport?

Terminal is, actually, the building, where you get tickets, pass various inspections, have dinner in the café or buy gifts at Duty Free.

This terminal serves domestic flights, that’s why inspections are not so strict there. There’s no custom control and it’s possible to pass the registration more quickly. It’s usually named O’Hare American terminal.

If you manage to get to Terminal 1 in O’Hare – then you are a real lucky beggar, because here ORD airport history began.

Chicago O’Hare Airport was built in 1945. In the early 50’s it started to transport passengers by air. At first there was only one terminal and it served domestic flights.

Of course, the modern version of Terminal 1 is very different from that one in the middle of 20th century.

Nowadays Chicago Terminal 1 consists of two concourses (B, C). T1 can boast with 50 gates. From here you can fly with the assistance of the following companies – United Airlines, United Express, Lufthansa and some others.

If one of destinations of your trip is Chicago terminal 1, you should be informed about all services, which are affordable here.

First of all, there’s ATM for those, who need to replenish the wallet with some cash; a restaurant to have some food and several shops to get gifts for your friends and partners.

There’s a restroom to relax before the long flight, to read a book and to have a drink.

For people with disabilities there’s wheelchair assistance in concourse B and defibrillator room in case if some visitors feel bad.

As you see, Terminal 1 can boast with great infrastructure. But what’s about Terminal 2?

In early 1960s O’Hare airport consisted of 2 terminals – the internal and international ones. Later the other terminals appeared and were developed, and O’Hare terminal 2 turned into one more internal terminal, which is now served by Delta Air Lines and some other companies.

Terminal 2 at O’Hare looks more solid than the first one.

It consists of 2 concourses – E and F, which both have 43 gates.

Alongside the services, which are affordable at O’Hare American terminal, here there’s also a chapel and pharmacy.

This terminal was built in 1960s and then reconstructed in 1980s. Among three O’Hare terminals, which serve domestic flights, the third one is, probably, the most glamorous and interesting. American Airlines and Japan Airlines provide their services here.

O’Hare terminal 3 consists of 4 concourses (G, H, K, L) and 75 gates. By the way, in 2018 five more gates are planned to be added to Terminal 3. The company, which serves the third terminal at O’Hare, concluded the deal with the Chicago Mayor administration, according to which it is responsible for building of 5 more gates.

Thus the general amount of gates at Chicago International airport will increase from 189 to 194.

If you have to stay a couple of hours at O’Hare American terminal 3, make sure, that you know everything about its facilities.

Here the visitors can pop into numerous cafes and restaurants. The lovers of Mexican cuisine plan their schedules in such a way, that they have time to eat at “Tortas Frontera”. The fast food café has a big choice of breakfast options and serves the greatest Mexican sandwiches in Chicago. The clients, who prefer Mediterranean cuisine, go to “La Tapenade”.

If you don’t need any extra calories, and even plan to get rid of some of them, then visit a yoga room, which is situated at O’Hare American terminal 3.

Not far from yoga oasis there’s an aeroponic garden.

So, there are lots of things to do at Terminal 3. It’s beautiful and roomy, but not so mysterious, as Terminal 4.

Even experienced travelers can’t solve the mystery of Terminal 4 at O’Hare. Everyone knows, that the airport has 5 terminals, but you won’t be able to find the 4th terminal on the map of ORD airport.

As you know, O’Hare International airport passed through several massive renovations. During the airport upgrade in 1984, Terminal 4 was created. Then it was a temporary establishment, which served as international airport. In 1993, when another international terminal was built, it was titled as “Terminal 5” to avoid misunderstanding and confusion.

So, there’s no T4 one among Chicago airport terminals. But the T5 is great!

The youngest of all at O’Hare American terminals, the fifth one is developing all the time. It is the only one O’Hare international terminal, which serves flights to various countries all over the globe – to Turkey, Japan, Canada etc.

Most of the visitors pay attention to the fact that Terminal 5 doesn’t look as luxurious and respectable as three other ones, which serve domestic flights.

Terminal 5 consists of only one concourse – M and has 21 gates. Nine more gates are planned to be added in the nearest future. Here you won’t be able to find numerous book shops and authentic restaurants. There’s just one gift shop, Duty Free shops and numerous newsagents here.

Like at any other terminal in Chicago O’Hare, here you can find an emergency room, several cafes and restaurants, ATM and restrooms with free Wi-Fi.

By the way, not everyone knows that free Wi-Fi at ORD airport is affordable during 30 minutes only. After that you have to pay for the traffic or go into some other establishment here, which offers free Wi-Fi – to the restaurant or café.

How to Shirt From One Terminal to Another at O’Hare?

Very often O’Hare is not the last place of destination for the passengers. People get out of a plane and are ready to go on the board of another one in several hours.

If both connecting flights take place at different terminals, the passenger must know how to shift from one terminal to another.

If you plan to get from T1 into T2 (that means, that both connecting flights are domestic), you can do it even on foot. The route can be not long, but it depends on the number of gate you need.

If you are not in a walk mood, or the distance is too long, it’s better to use shuttle train.

The train connects O’Hare international terminal 5 with internal terminals, as well as with parking facilities.

The shuttle train works 24 hours per day. It goes each 4 minutes and is absolutely free.

As you see, Chicago O’Hare administration and personnel try their best to make the airport a cozy and comfortable place. Nevertheless, most of the passengers mark ORD airport as one, which they dislike.

Clients pay attention to long security line, which is typical for O’Hare, because millions of the guests every year fly through the airport.

But in any case, O’Hare is a special place in Chicago. It has history, its unique charm and big mechanic heart, which serves people.